And inline with the theme of "It's not a bug" there are a few "features" that you can exploit to buy monsters for free and get over leveled monsters.  The monster stats are supposed to be unsigned ints so if you debuff a monster below 0 its stats will become loop to max, but there is no

However that's about it since I "accidently" spent all my time making receiving and placing the monsters feel good and look cool.  Which means I ran out time to actually add in the auto-battler part, or the planned items, or the planned synergies.  So it's basically just a vertical slice that didn't get a cut of battle gameplay, but at least the shop is more or less fully functional besides the missing sell button... and food... and items.

Order is determined by speed and monsters attack in order.   To win all of the opposing teams monsters must die.  If a monster dies before its turn it isn't able to attack back.

The front liners attack the opposing sides front liners.  If they don't have anyone in front of them they will attack diagonally.  If there is still no one to attack they skip their turn.

The team captain on their first turn will choose one friendly monster to go next to.  On their next turn they will attack.  Every turn they calculate if they should stay and attack or use their turn to go somewhere else.  The higher the overall stats of the captain the higher awareness they have and will plan their choices several moves ahead.  A high awareness captain will calculate which monster wins each matchup and moves accordingly.

Foody Items that boost boost the RGB values of the monster and therefore its stats as well resulting in being able to see the stats upgrade just by the color.

Item items that provide synergies and special bonuses similar to snkrx items which can change the way a team fights.  (Item that makes enemies target the captain if nearby)

Definitely slightly overscoped.  Although I do like how the particles, art, and monsters turn out.  And I just love opening the tube as well as the ejected monsters when rerolling. 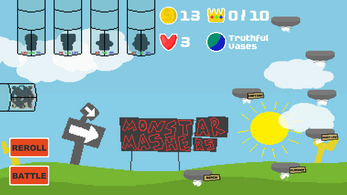 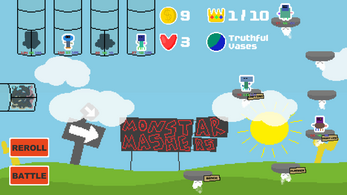